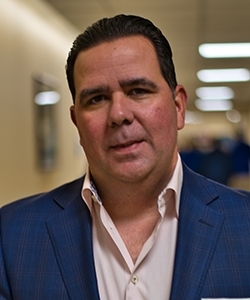 Marcello Sciarrino brings his professional skills as a successful entrepreneur to the board, but most importantly he brings his strong belief in giving back to his community.

Marcello, a native of Brooklyn, is a self-made man whose acumen for the automotive business quickly led to its tremendous growth, opening several car dealerships in the NY an NJ area. He and his partners established their first dealership in Lawrenceville, NJ and currently own and operate the Island Auto Group which one of the largest privately owned auto groups in the country. Marcello is hands-on in his business, priding himself as actively engaged in all his projects so he can ensure growth to meet his customers’ needs and stability for his many employees.

According to Marcello, part of being a successful businessman is using his success for the greater community. His motto is: You do good, you get good. Island Auto Group has donated over $500,000 to a diversified list of organizations such as Richmond University Medical Center, Staten Island Little League, Catholic Youth Organization, The Eger Foundation, Toys for Tots, NY Cares Coat Drive, 122 Precinct Community Council, March of Dimes, and many local schools.

For all of his innovative, modern approaches to business, Marcello is an old school man with manners and a community philosophy. His quite, mild mannered nature has made him an important member of several boards such as the Operating Board Richmond University Medical Center, Foundation Board Richmond University Medical Center, Board of Trustees Staten Island Academy, Board of Directors Richmond County Country Club, Board of Directors Staten Island Economic Development Corporation, the Hyundai National Advertising Board.

Marcello resides on Staten Island with his wife, Charlotte and their three children. They are all active members of the community and cherished by him. For Marcello the most important hour of the day is still dinner time where the five of them share food, stories and love.