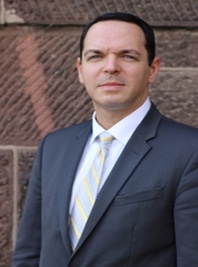 Brian S. Moody, Esq. is the Senior Vice President of Legal Affairs and Risk Management, General Counsel and Chief Compliance Officer. He oversees these areas, as well as the hospital’s corporate compliance initiatives. Mr. Moody has more than a decade of experience representing healthcare facilities and professionals in various areas of litigation and regulatory matters. Following his career as an Assistant District Attorney in Brooklyn, he worked as a trial attorney and partner for several law firms specializing in healthcare litigation.

Throughout his career, Mr. Moody has worked closely with hospital risk management to develop best practices, and has lectured on related topics. This includes at RUMC where for the past 6 years he has worked closely with the hospital’s staff and administration on various matters. Mr. Moody graduated from Fayetteville State University with a BS in Economics, and received his Juris Doctor from North Carolina Central University School of Law. He is admitted to the New York State Bar, as well as the United States District Court for the Eastern and Southern Districts of New York.