Zulu
Home » News » After 60 years, New Dorp triplets come back to say thank you to the hospital that gave them life 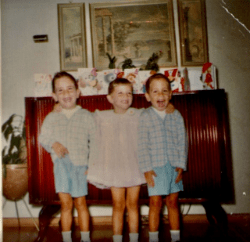 STATEN ISLAND, N.Y. — It’s not every day that triplets come back to express their gratitude for a team of medical professionals who gave them life. But the Agnellos are making it happen.

As Richmond University Medical Center gears up for its annual Arnold Obey/RUMC 5K Run at Clove Lakes Park April 9, staffers at the medical center connected to James, John and Kathleen Agnello, the first set of triplets born in the Neonatal Intensive Care Unit (NICU) of the West Brighton health care facility in 1962 when it was known as St. Vincent’s Hospital.

In fact, two of them — James and John — will be participating in the race that honors Obey, a longtime educator and a pillar in the Staten Island sports community.

Obey was a colleague of the triplet’s dad, Joseph Agnello. The men worked together at Markham Intermediate School, where the youngsters attended after school programs and camps with Obey. So, after hearing about the event, the triplets expressed a desire to come back and support the fundraiser.

Mom Mary was a staffer at the CYO and when her children were older she returned to the work force at the former New York Telephone Co. and the New York Public Library — all the while involved in the St. Charles religious education program.

They were premature, born six weeks early, each weighing only two to three pounds.

Back then the NICU was called the St. Vincent’s Premature Nursery and Infant Special Care Unit. The triplets were cared for in the unit from birth until Sept. 13 of that year, making it a total of nearly three months in the hospital’s special unit.

Margaret McGurn, one of the nurses who cared for them in the hospital, continued to visit the family for years after they were born.

James, a resident of Yonkers, is a high school and middle school counselor. He earned a master’s degree from Lehman College, coaches cross country running, a ski team at Bronxville High School, at Iona Prep and at public schools. He often takes humanitarian trips to Nicaragua, Tanzania and the Dominican Republic. During spring months, you’ll find him running track and field.

Kathleen Viscardi, a resident of Hazlet, N.J., who played basketball and also ran track, worked for the Bank of New York and was a Director of Parks and Recreation for her town. She’s the mom of two children and holds a master’s of business administration major in finance from St. John’s University.

John, a resident of the Green Point neighborhood of Brooklyn, taught at Monsignor Farrell High School and is now a retired assistant principal. He has a master’s degree from Kent State and was a sports track writer for the Advance.

The triplets were placed in three separate classes in kindergarten at PS 41.

They then went to St. Charles elementary school where John and Kathy were in the same class and James in another. But the boys were later reunited when they attended Monsignor Farrell High School

The triplets have an older sibling, Richard, 22 months their senior, who they describe as a “great big brother.” The triplets point out with a chuckle that there were times though when they would band together against their older brother.

Kathy also recalls other times when the boys ganged up on her, all in fun. After all, the siblings had lots in common — including their special affection for athletics.

“We did a lot of outdoor sports stuff together,” said Kathy, who added at the time there were very few females involved in those sports.”

James pointed out, the three of them were always on the same wave length, but occasionally there were competitive moments.

“There was a lot of storytelling and sibling bantering, but it was all great fun,” James continued.

James will be participating in the race and John will be cheering him on.

When asked if there were triplets in the family, they recall their mom has cousins who are twins — but no triplets anywhere.

“Our parents did a phenomenal job keeping us as individuals and letting us be ourselves,” said Kathy, who added she can really appreciate her efforts since she has children of her own.

“Those babies are the ones who need the most care and special services,” John said. “The NICU provided my siblings and I critical, life-saving care.”

James chimed in: “It’s what kept us alive and made us who we are. We were very premature and they prepared our parents for the possibility of not all of us surviving and if we did all survive, we wouldn’t achieve certain milestones. We all ended up healthy and active, contributing to society in many ways. A NICU is a desirable service – there’s no need to go to Manhattan when excellent services could be accessed here at RUMC. I have tremendous gratitude towards the staff during the pandemic for all that they’ve done and continue to do.”

Over the years the twins recall stories in the Advance not only when they were born, but later when they celebrated special milestones — one in particular marking a 20 year reunion. John recalls vividly with a smile, “The day Advance photographer Tony Carannante, was willing to snap away. But not until I changed my shirt!

Thank You to Our Event Sponsors

Understanding the Pros and Cons of Reverse Shoulder Replacement Why You Should Not Delay Torn ACL Treatment Male Breast Cancer: Why Men Should Perform a Self-Exam Colon Cancer Symptoms You Could Be Missing What Is the Best Age to Have a Knee Replacement? How to Sleep after ACL Surgery and Other Tips for a Good Night of Rest Zenna Family Names Neonatal Intensive Care Unit Resources for New York Families Amid Infant Formula Shortages Richmond University Medical Center Marks May As Mental Health Awareness Month  Movements and Activities to Avoid after Knee Replacement Surgery